You are here : Home > Jukka-Pekka Valkeapää 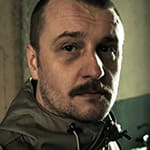 J-P Valkeapää, born in 1977, is a critically acclaimed and awarded Finnish film director. Debut feature The Visitor was selected to CineMart (Rotterdam), developed at Cannes’ Cinéfondation and premiered in Venice. Valkeapää’s second feature They Have Escaped premiered at Venice and Toronto. The film was nominated for seven National Finnish Awards Jussi, of which it won four, including Best Film and Best Direction.