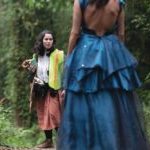 Costa Rican-Swedish screenwriter/director. She started her career in physical theater in Costa Rica before graduating from the Stockholm University of the Arts and Columbia University's Film Program. She was an alumna of the Berlinale Talents, TIFF Filmmaker Lab and NYFF Artist Academy. Her shorts have screened at many film festivals. She co-wrote Entre tú y milagros, winner of the Orizzonti Award for Best Short. She is currently developing her second feature film.