In Robert Kaylor’s Carny, the world of the carnival is an illusion manipulated by the carnies to fleece the suckers. The marks generally deserve what they get, because of their greed, corruption, or just plain stupidity. It’s share and share alike for Frankie (Gary Busey) and Patch (Robbie Robertson), partners in a dunk-the-bozo act in a carnival travelling through the American South. At one of the small-town stops, Donna (Jodie Foster), an alienated teenager, dumps her obnoxious boyfriend and, with Frankie’s encouragement, joins up and moves into their trailer (and Frankie’s bed). Feeling displaced, Patch schemes to get Donna out of the carnival. However, the carnival’s owner needs Donna to foil a loathsome pair of local officials who demand payoffs. She plays her part perfectly and is accepted by all, although she moves into another trailer. 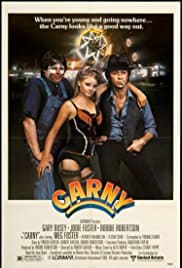