In my opinion, nobudy knows exactly why he or she makes a film. An intuition becomes an idea, and I suspect that in the end it serves to free the author from an obsession. In the case of « Mater Amatisima », I did not know exactly what my aim was until my encounter with Julito de la Cruz, the hero of film.
While the doctor was explaining me, at the clinic where Julito was confined, that the child had a mental coefficent of 30/40, and while Julito was examining me timidly, gravely, I said to myself that if others could see the fascinating beauty of this swarthy child, solidly buid and autistic, they would undoubtedly question their own lives, wonder about their own level of normality and insanity, as well as their ability to adapt to this absurd way of life which has taken us a mere 2 000 years to construct, and which the vast majority of people would not hesitate to label « civilized » and « reasonnable ».
Furthermore, the fact that no one, to my knowledge, has ever produced a film with the participation of an autistic child, was for me a great temptation.
There are probably many other reasons, which I cannot recall at the moment, or which perhaps I prefer to forget.
José A. SALGOT

Born in Aiguafreda, a little village in the Montseny, had jobs like semi-professional card player, comic illustrator, advertising photographer, promoter of well-known venues on the Barcelona live music scene. He studied sociology, philosophy, business studies, graphic design, macro economics… and graduated in economics at the University of Barcelona and took his Master’s degree at ESADE, as well as a degree in graphics from the Eina school. For practical purposes, he graduated at the 1st World S-8 Film Festival in Geneva, Switzerland, in the seventies.
His first 35mm short film, Madison, won the Sant Jordi Award from the Catalan government. His first feature film, Serenata a la Luz de la Luna, won the Ibero-American Festival in Huelva and the second, Mater Amatisima, went to the Cannes Festival and won a lot more awards, coming between Godard and Fellini in winning the second Golden Camera from the Belgian film library, as the first winner was Godard and the third Fellini. He has taken part in dozens of international festivals, like those of Montreal, Locarno, Los Angeles, Valladolid, San Sebastian, the New York Spanish Film Week, Sydney, Dakar and Moscow, obtaining various awards. He set up ALGUIENVOLO AUDIOVISUALS & ARTS which, has produced Fum, Fum, Fum, by Roger Lapuente; Pepe Sales: Pobres, Pobres, directed by Albert Plà and Lulú Martorell; Godspeed, by Jesús Manuel Muntaner and Myway, produced, written and directed by Salgot himself. 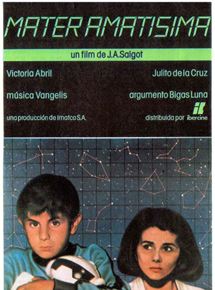