A group of 15 year-olds lives in a suburban district of Rome. To attract the attention of the others, the youngest, Lorenzo, makes up a story about one of their friends, who is said to be dying of a cancer… After some thought, the friends decide to convince a prostitute to spend a night with their friend before he dies… Two years later, the same ragazzi, the same district. While attempting to get rid of counterfeit money, they live by their wits, on petty theft, trying – unsuccesfully – to win their independence. Until the day Lorenzo, tired of moving crates of tomatoes, decides to steal them, giving the others a chance to run a profitable business without a boss. This is simple narrative thread around which the life of these growing ragazzi gets organized. 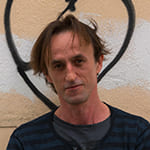 He was born in Italia. He graduated in philosophy and studied drama at the Colli Theater. He studied direction with Nanni Moretti and Nikita Mikkhalkov. He was assistant director to Carlo Mazzacurati on Un’altra vita and made short and medium length films, awarded in Turin and Bellaria. Nella Mischia is his first feature film.