Far and above, whatever the story may be, what count in a film are the feelings and emotions expressed. For this reason, I won’t attempt to relate the plot, « Oggetti Smarriti ». The film consists in an apparently disordered series of facts, things, persons and ideas which translate into a wide gamut of emotions : a child’s tantrum, a woman, a day, a night, missing a train, the Milan Central station, the crowds, a stranger, a hellish version of first love, the smell of a waiting room, heroine, just before dying, making love, losing your memory, mother and daughter, a dream, a puzzle… A film.
Giuseppe BERTOLUCCI

Was born in 1947 in Italie. He is Bernado Bertolucci’s younger brother who is also a film-maker and son of poet Attilio Bertolucci. Guiseppe Bertolucci is a director and sreenwriter. He was member of the jury at the Venice Film Festival in 2000. 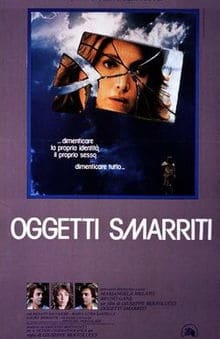