Will is a bartender in New Orleans. He has a great job, great friends, and a girlfriend, Carrie, who loves him. He skates across life’s surface, ignoring complications and concentrating on enjoying the moment. One night at the bar, a violent brawl breaks out, which injures one of his regular customers and causes some college kids to leave behind a cell phone in their haste. Will begins receiving disturbing texts and calls from the stranger’s phone. While Will hopes to not get involved, Carrie gets lost down a rabbit hole investigating this strange malevolence. They’ve discovered something unspeakable, and it’s crawling slowly into the light. 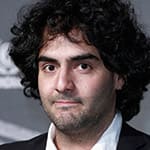 Babak Anvari is a London based, writer, director and producer. His first feature film, Under the Shadow, was the UK selection for the Foreign Language Academy Award and won him the BAFTA for Outstanding Debut in 2017. He is also a partner at Two & Two Pictures, where he oversees the development and production of feature and television projects.

based on
The Visible Filth de Nathan Ballingrud